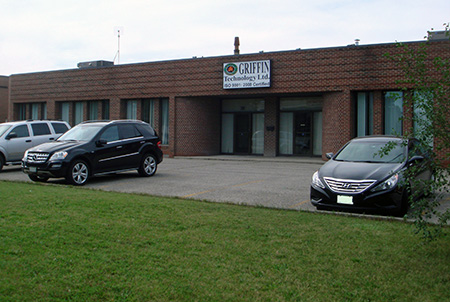 Griffin Technology first began its coatings operations in 1991, then known as Genesis Equipment Systems Inc. specializing in the refurbishment, repair and finishing of Canada Post community mailboxes, and the repair of Canada Post mailbags. As the 90s progressed so too did Griffin’s reputation as a capable and diligent powder and liquid coating application supplier.

As we entered the 2000s, Griffin moved to its current facility of 34,000 sq.ft. in Toronto, Ontario, to house the 5-stage paint line, 3-stage paint line, batch and assembly area. We have had quality assurance protocols in place since our humble beginnings, which has helped us achieve ISO 9001:2001 Certification and the subsequent successful renewals to ISO 9001:2008 and now ISO 9001:2015. Griffin has been an approved supplier of John Deere since the earlier 2000s to handle their finishing and assembly needs. Now recently we have been further approved to handle not only the application of John Deere Green, but also their Black, Charcoal and Yellow. In 2010 General Motors approved Griffin to take care of its finishing needs; in 2015 Ford, Hino and Volvo approved Griffin.

Today, Griffin Technology has become a reputable powder and liquid coating application supplier to some of the world’s biggest brands and companies. We have established ourselves as a trusted partner and supplier to manufacturers, taking care of their finishing, assembly, and refurbishment needs. We hold ourselves to high standards and follow a clear Code of Conduct; we pride ourselves on our ability to work with both our valued customers and our suppliers, maintaining strong relations with both sides to meet those sometimes-tight deadlines. We are committed to Taking Care Of The Finishing Touch.